Arriving in a foreign city in the dark is a bit of a challenge. Everything seems a bit more eerie and surreal than in daylight.  I have now realized that it’s pretty much dark, getting dark, or gonna’ be dark soon when you’re in London in November.

The tour guide from the airport was great, she guided us into the hotel and checked us all in – no queueing for us!  As she passed out our room keys, she promised to return in just 6 short days to shepherd us back to Heathrow for our return flight.

We chatted for a bit with some of our group that had arrived a few days before us and promised to meet up with them soon.  Hubby and I schlepped our bags up to the 8th floor using one of the 4 lifts (aka elevators) available to guests of the hotel.  They seemed to be either cavernously empty or full to the gills.  Thankfully, we found they were equipped with sensors that would alert you if the lift was full, “FL”, or over the limit, “OL”, which happened more often that you’d think. 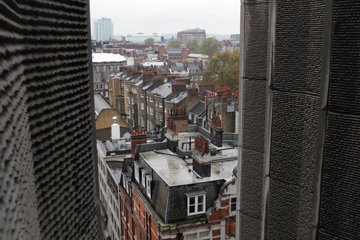 Arriving in our room, my heart leapt for joy at the open window.  I’m a nut for fresh air and we didn’t close that window more than a few times in the week we were there.  Since there was no screen (!), hubby was able to get his camera out the window and take a pic of our ‘neighborhood’ once it was daylight.

I was anxious to get out of our room and experience London that first night.  Fortunately, we had a plan.  We had been invited to the manse of the Pastor of the American Church in London for a ‘drinks party.’  The trick was, we need to navigate the Underground (Tube) in order to get there.

There was some loose discussion about going to the party as a group, but since only one or two in the group had working cell phones and we didn’t know anyone’s room number, communication was a bit limited.   No one was in the lobby when we descended from our room so, not wanting to squander a minute and feeling rather cheeky, Hubby and I set of for the manse on our own.  The tube stop was right around the corner and we plunged down the stairs with abandon.

Honestly, I think we were just trying to keep up with the flow of pedestrians: Londoners walk really fast, especially in the tube stations.  Thanks to our hosts and some seasoned travelers in the bunch, our Oyster Cards (refillable Tube/Bus passes) were ready and waiting for us at the hotel so we sailed right through the first set of gates into THE UNDERGROUND.

When they say Underground, they really mean UNDER-ground.  Each station seemed to have it’s own particular scheme to get you down to the trains- straight staircases, curved staircases, escalators, lifts, moving sidewalks, mazes, and tunnels. That first night, I was shocked at how deep we were going to catch the Northern Line to our destination.  I totally understand why Londoners took shelter in the Tube stations during the Blitz. 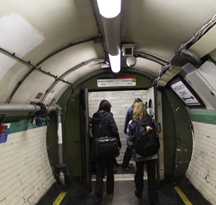 All the tunnels and pathways are well-marked and there are digital displays at each platform so you know when to expect the next train and where exactly it’s headed.  Unfortunately, we were just a little overwhelmed by everything that first night and jumped on the wrong spur of the Northern Line.  When we figured it out, we just hopped off at Camden Town, switched trains, and sailed on to our destination.

I must say, I felt giddy and triumphant when we arrived at the manse in one piece.

The party was wonderful and it was great to gather with friends old and new to chat over what we’d been up to and what we planned to do with our free time. 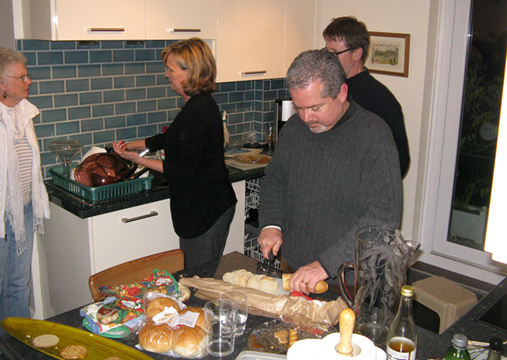 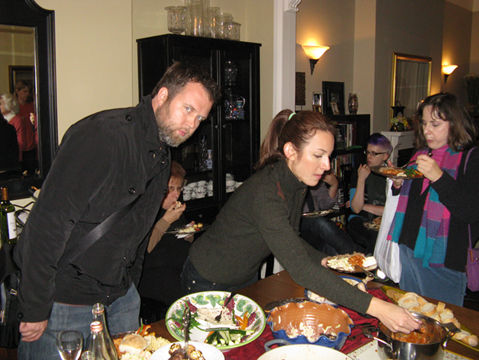 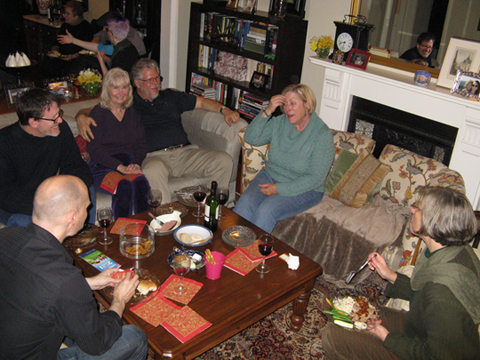 We walked back to the Tube through the rain and arrived back at the hotel with no difficulty at all. I watched Hubby sleep soundly in his twin bed as I wrote feverishly in mine, trying not to miss one detail of the trip so far.  I fell asleep calculating how much we could jam in to the next day.