First morning in London and I was wide awake at 4 a.m. Considering that was Noon in California, I did a pretty good job of sleeping in. I managed to get back to sleep and woke just after the London sunrise at 7:45 a.m. We successfully navigated the electrical outlets and shower head (Brits don’t believe in water pressure?) and had our first English Breakfast in the hotel. I stuck to cottage cheese, yogurt, fruit and a croissant each day as Hubby sampled the various hot food items.

It will come as no surprise to any of you that a trip to the Library was first on my list of things to do.  I have to say that the British Library is no ordinary Library.  I was not surprised to find out that it’s free, but I was surprised to find out it had exhibits.  Since we weren’t in a hurry, we checked our map and set out to walk up to the Euston area of London to check it out.   You can look at the pictures from that walk here. 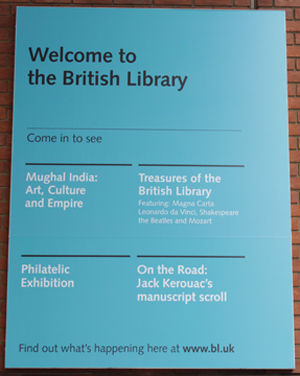 In the Piazza just inside the gates of the library is a giant scupture of Issac Newton measuring out the universe.  It was done by a Scottish sculptor, Sir Eduardo Paolozzi, who also did a lot of the mosaic work in the tube station near our hotel. 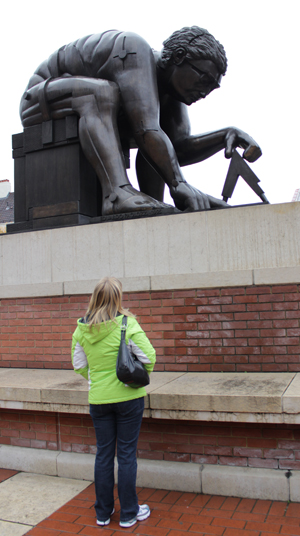 The British Library is home to more than 14 million books, 58 million patents and 3 million sound recordings.  It’s a major research library with reading rooms for different academic subjects where you can do research if you have a Reader Pass (free as long as you have a permanent address).  It prides itself on making it’s collection accessible. 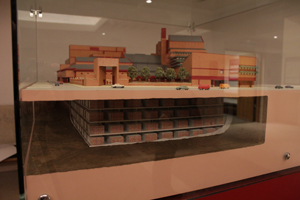 Inside the library is a model of the entire complex showing how and where the books are housed.

Up the center of the building is a six story glass tower that encloses the King’s Library: printed books, pamphlets, and maps that King George III collected between 1763 and 1820! 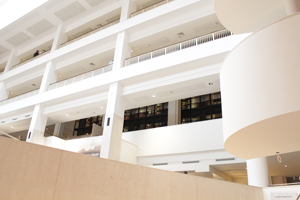 I’ve buried the lead a bit here since there’s an amazing gallery that’s open to the public every day for absolutely free that holds some of the most magnificent books and manuscripts I have ever seen.  We strolled through  room containing The Magna Carta, Lindisfarne Gospels, Chaucer’s Canterbury Tales, and, my very favorite, the original manuscript of Handel’s Messiah.  (Handel lived in London for much of his life and the Messiah was performed at Covent Garden).  We felt echoes of home looking at the temporary collection of Armenian scriptures.  I wish I could include images here so you’d get a sense of the beauty of these books.  Of course, we couldn’t take any pictures inside the Gallery, but, trust me, it was breathtaking.

As we walked back towards the hotel to meet some friends for an afternoon adventure, we stopped at a little place called Eve’s Cafe for lunch.  We both had delicious hot paninis which we ate at the little table out front. As we munched, I noticed that we were across from the Bloomsbury Hotel which meant we were in Bloomsbury, which meant we were in Virginia Woolf’s ‘hood, which meant literary tingles with my goat cheese panini.