Ok, first of all, books weigh a lot more than I realized.  So do shoes. And plug adaptors. And suitcases.

Second of all, time slows down when you are waiting for an international flight. I swear that it took eons for them to call our flight for boarding and when it finally happened the actual queuing up was like racing snails. (Please forgive me if I slip into Londonese from time to time.)

Third, putting little pillows in every airline seat is just asking for a giant pillow fight!

Seriously, Virgin Atlantic is a great airline to fly and I was flying with a great group of people. 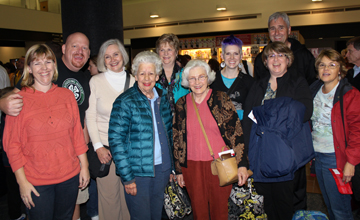 We didn’t have any problems with luggage or boarding, flying or landing. I had time (10 hours and 40 minutes) to do a little people watching on this flight. First there was the slightly overweight middle-aged tattooed guy who undid his belt and unzipped his pants before he sat down and fastened his seatbelt. Glad I wasn’t sitting next to him! Across from me was a 40ish hipster with a genius cut (think Einstein) who was chatting up the blond British chick pinned between him and the window. His opening line was something like, “I’m a song writer and I’ve written a song, but it’s not really a song, but it sounds like a song.” Apparently, she was a songwriter too because they soon devolved into a conversation about ASCAP and BMI and performance royalties vs. mechanical royalties. I left them to their own devices.

The whole flight was really about anticipating the landing and helping my body adjust to the impending time change. We took off just after 9 p.m. and would arrive at Heathrow just after 3 p.m. the next day.   That means I would lose a night’s sleep as well as most of an entire day.  Thanks to the seat back screens where you can choose what you watch, I knew exactly where we were at any given moment: location, altitude, air temperature, head wind – they really do let you in on all the nerdfo about the flight.

We had dinner somewhere over Utah. I chose Chicken Korma, although the Braised Beef didn’t sound bad either. Apparently I was asleep when they came around with the Tiramisu because it was on the menu, but I have absolutely no memory of eating any such thing.

Between cat naps, I kept my eye on the vitals: -72 degrees Fahrenheit over the Rocky Mountains at 35,000 ft.

I dozed again, wishing I could recline my seat just a bit more, but glad the kid in front of me couldn’t tip any further into my lap. They flooded the cabin with light after a few hours and came around with more food. While I breakfasted off the coast of Ireland with nearly 300 people I would never see again, I cursed my iPod as the battery died in the middle of Rick Steves’ “Affordable London” podcast. So much for informative entertainment.

Thankfully, we landed soon after ‘breakfast’,  withdrew some pounds (do they call it ‘cash’?) and sailed through customs (we must have, I can’t remember anything about it). 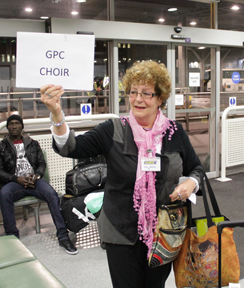 As we emerged from the bowels of Heathrow, we were greeted by Mimi (Not Me-Me, Mih-Me), our ‘tour’ guide.  She fetched our bus (driven by Momo – no kidding!) and narrated the ride to the hotel through the London traffic.

Stay tuned for London Chronicles #2: A Night in London

I must confess, I stole the title of this post from a blogging friend (and I, too, am pretty sure it’s not a ‘real’ word).  His post entitled Explicit Recollectivity helped me relax before my London trip.  In it, he talked about how we learn the most from an experience after it’s over – not when we’re anticipating it, not when we’re experiencing it, but when we are reflecting back, making connections, and fitting it together with the rest of our lives.

I’ve spent the last 7 days in London and now that I’m back on U.S. soil, it’s time for some ‘recollectivity.’  If I’m doing the math right, 7 days abroad equals about 25 blogs post so hold on, here we go! 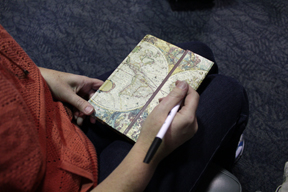 If you know me at all, you know I’m a planner.  A list maker.  When faced with a task or an event, I break it down, write it down and attack it in baby steps.  I totally buy into the philosophy that “For every minute spent in organizing, an hour is earned.”  (This may or may not be a Ben Franklin quote, if you believe the Internet.)

When faced with my upcoming trip to London, I earned more hours than I will be ‘across the pond’.

First stop: Google.  What the heck did we do before Google?  I googled everything London.  Best places to visit..  Maps of..  Films about.. Books about.   I created an Excel file to keep track of my finds and I bookmarked more websites than there are Doctor Who episodes.

Next stop: Library.  Well, actually, the Library website, one of my personal favorites.  With a  library card you can look up books online, request a copy of the book and they will send it to any library of your choice in our city library system.  You can then walk in, find your books labeled with your name on a shelf right inside the front door, and sprint to the self-checkout kiosk before you are sucked into the void.  This works extremely well when I don’t have hours to spend savoring all the stacks have to offer. 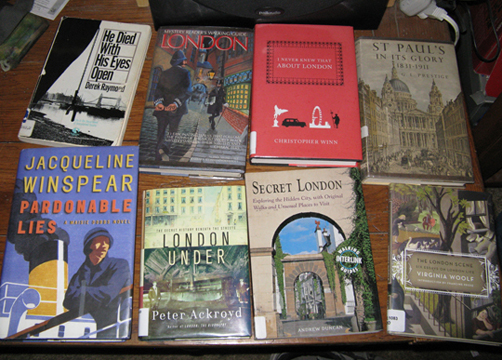 I pulled out books on places to visit as well as a few works of fiction set in London.  Whether I visit all the places I’ve read about or not, I’ve already wandered down those streets in my mind: Bliss.

As the trip approaches, I am busy fleshing out my Excel chart and adding bookmarked sites to my Google Map.   I am bouncing from book to book, cross-referencing and researching each area.   I’ve downloaded podcasts with travel tips and audio walking tours of some key attractions.  I’ve now consolidated my to-do list down to 4 items: plan for London, read about London, blog about London and rest up for London.

I’ve crossed off the first three, so all that’s left is to bid you goodnight.

In just 48 hours, I will be boarding a plane for London.  I am part of a choir that will be singing at the American Embassy Thanksgiving Service at St. Paul’s Cathedral.  It’s a plan that’s been in the works for nearly a year, but it still feels unreal.

The Thames, the Tower of London, the Tube, Big Ben.  These are all just words without substance.

There’s been so much talking, planning, rehearsing and fundraising that the actual trip seems like an afterthought.  At least that’s what it feels like now.

I’m sure it won’t once I land at Heathrow.

I’m sure it won’t once I’m on the plane.

I’m sure it won’t once my suitcase is packed.

Sometime in the next 2 days, London will become a reality.  I can’t wait!