It looked like Thursday was going to require an advanced degree in order to navigate successfully through the parenting maze.  It isn’t that parenting my teens and pre-teen is that hard, it’s needing to be in multiple places at one time.  Take school, work, band, choir, and football, and throw in a read-a-thon and back to school night and you have a  full day, to say the least.  I was ready to make the ‘ultimate mom sacrifice’ and skip E’s first football game so I could drive the other two around, but we made some adjustments and hubby and I were able to make it to E’s first Freshman Football game. I am so glad I went!

As we drove down to San Gabriel in the sauna that has been Southern California for the past month,  I must say that my biggest concern was how sunburned I’d be by the time I got home. I had donned my only pair of shorts in an attempt to keep my body temperature below 100 degrees.  Turns out wearing shorts was a good idea for another reason.

The traffic wasn’t too bad heading east on the 210 (small miracle) and, as we drove the last few blocks towards the high school, a few fat, juicy raindrops hit the windshield.  “One.” I counted. “Two.”  Then got ‘the look’ from the hubby.  I got all the way to seven before it quit sprinkling. Ahhh, too bad.

“It would be so great if it rained on us,” I said thoughtlessly.

We arrived at the school just in time to find our friends in the stands and obey the cheer leaders’ command to “Stand Up for the Kick-Off”.  We scanned the sidelines for our boy in his #69 jersey. He looked so huge, I couldn’t believe it was my kid. When did this happen?  (*Side note: I think they gave him that number because they knew he could handle it with maturity and panache.  If you don’t know what I’m talking about, just forget I ever said anything.) 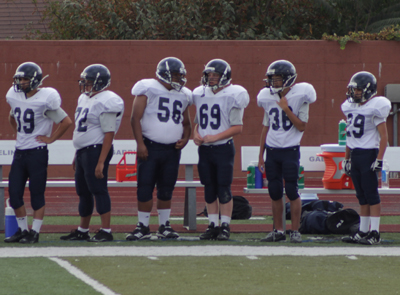 The first quarter concluded without a score, then came the second quarter. Their turn, our turn, their turn.  We stopped them inside the 5, and then it was our turn again. 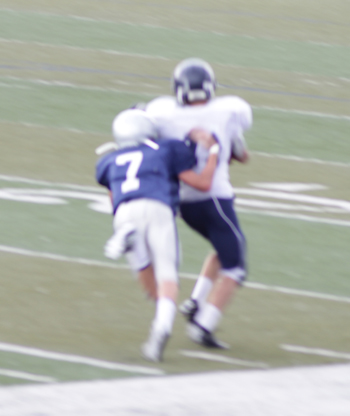 Don’t ask me what led up to the score because I really couldn’t tell you.  The only thing I remember was the kid from our team sprinting down the field, skirting the sideline, breaking tackles, heading for the corner of the end zone.  When he scored, the stands exploded with the cheers of happy parents.  I was verklempt.  It was a proud Falcon moment.  And then God clapped. He must be a Falcon Fan. (It was off in the distance and more of a rumble than a clap, but you get the idea.)

The thunder quickly faded from our minds as the Falcons lined up to kick the extra point.  The kicker connected and the ball skipped over the opposing linemen, wobbled awkwardly through the air into the crossbar, popped up, and dropped behind the bar.  It’s good!  It was one of those moments when the chills go down your spine and you just know that the team will be talking about that one for the rest of the year.  “Oh, man! Remember that kick..?”

The teams lined up for the next series, and then the rain started.  Plip, plop.  Bouncing off the metal bleachers with a joyful ring.  Cool!

I was giddy.  The rain was here to save us from the unrelenting heat and humidity.  My grin stretched from ear to ear.  It felt heavenly. 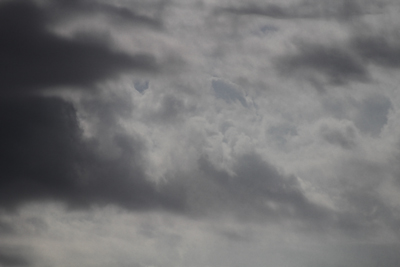 After about five minutes, the reality of the situation set in.  We were going to get soaked.  The parents who brought umbrellas to ward off the sun suddenly looked like prophets.  Some squeamish fans jumped up and headed for shelter.  “It’ll stop soon,” chirped some optimistic soul. (That might have been me.)

“This is great!”  It was football the way football was meant to be. I kept grinning. 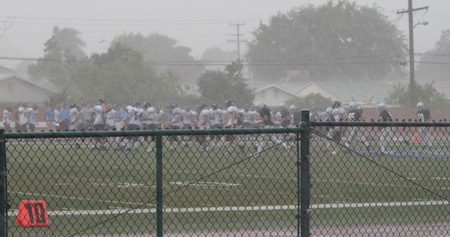 Pretty soon it felt like we were standing under a shower head. The wind started to pick up and then, the lightning started.  It was far away, but we could still see it and sitting on metal bleachers didn’t feel so smart.  We high-tailed it towards a safer location and hubby snapped a few last pictures of the game. 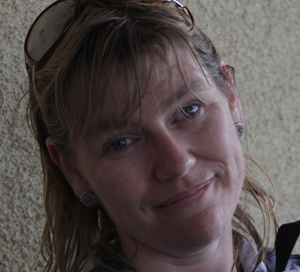 A dozen or so parents ended up on a second floor covered landing in a soggy bunch. Hubby borrowed a plastic bag from a janitor to protect his camera and we craned our necks to watch the game.

The lightning returned, closer than ever, and forced the kids off the field.  It was so close that the refs wouldn’t even let the kids grab the footballs let alone their gear bags.  They headed for the locker room to wait it out.

And the parents?  They pulled out their smartphones, posted Facebook updates, checked the weather (79 and Sunny? Fail.) and called home to see if it was raining there.

The rain did finally let up and the storm cell causing all the havoc headed towards the desert.   The teams returned to the field and began to warm up.

But it was not to be.

The lightning  flashed again and the bedraggled refs called it quits and sent the team to the bus.  Game over. 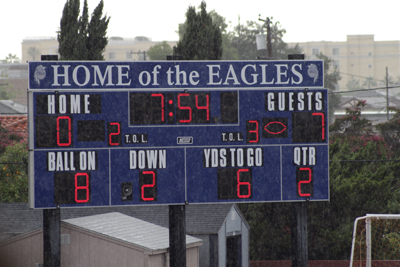 As we headed for the car in our soggy shoes, I was so thankful I didn’t have to go anywhere near the bus of sodden freshmen. Talk about humidity!

In the end, the only casualties were the cell phones in the boys’ gear bags.  E’s will live, but his screen is a bit foggy.  A little reminder of his first high school football game – the first of many. (I’m throwing an umbrella in the car before the next one.)