Just before Christmas I became aware that my church, the church where I work and worship, was on the list of local churches being targeted for protest by Westboro Baptist Church (WBC) while they were in town for the Golden Globes. (To protest, not to attend.) My first reaction was sadness: “Why can’t we all just get along?” Then I started doing a little research.
My first thought was that WBC was truly a church that just held more conservative views than my own. That could not have been further from the truth. WBC is an organization that proclaims hate pure and simple. It’s even in the name of each website that they operate. Their agenda is to proclaim God’s hatred for just about everything and everyone. According to the WBC website, our particular church was targeted because we allow the ordination of women.
As our church prepared for the visit with additional security, conferences with city officials, and increased communication with our congregation and our sister churches, our pastor wrote a blog post addressing the upcoming visit. Concerned citizens organized a group of counter-protestors that planned to appear at each of the four churches that were targeted.
This morning, the event itself was, dare I say, fairly uneventful. The counter-protestors arrived first and stood on each of the four corners of the adjacent intersection. They talked and greeted each other with smiles and handshakes, while holding their flags and signs. 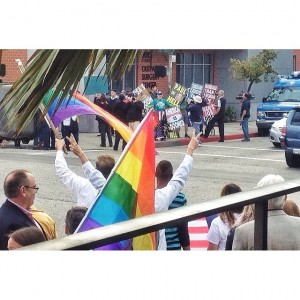 A small handful of people arrived representing WBC and stood on the corner opposite the church. Their bark was certainly worse than their bite. They weren’t particularly loud or confrontational from what I saw and their signs were rather ridiculous. They simply stood still and sang along with music playing from an ipod (I guess God doesn’t hate Apple). They didn’t march, chant, or advance on anyone.

The counter protestors sang Jesus Loves Me and cheered for our veterans (a frequent WBC target) and for our God whose message is one of love. I kept myself busy showing people how to access our restrooms and talking with friends and neighbors. Our worship service went on as usual at our regularly scheduled time with a few more friendly faces than normal. Everything seemed a little brighter and more meaningful as we sang, read scripture, and heard our pastor’s take on the power of interruptions like the one we had just lived through.
On the short list of the good that came from this morning’s visit by WBC are unity, personal growth, connections, meaningful conversations, supportive interactions, mutuality, renewed strength, and clarity of vision. We may not all be in agreement on all the issues, but quite a few people stood united against hate today and that is never a bad thing.