After a day of marathon sight seeing, we slept in a bit on Saturday.  Since it was the weekend and we were slower to get moving, the lifts were busier and the breakfast lines were longer. We lingered over breakfast with friends, savoring their stories, and then set off for the British Museum.

Just a few blocks from our hotel, the British Museum is completely free and stuffed with artifacts andtreasures from all over the world. 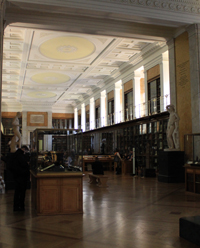 We made the mistake of not planning our visit.  Instead we just headed into the first exhibit we saw.  This turned out to be a room filled with random treasures from all over the world that was collected by King George III.

The best part of this room was the hands-on table where you could handle various artifacts under the supervision of a docent who explained the history and significance of the items.  One of the tables was staffed by a docent and two preteens who wore buttons printed with “I’m taking over.”  They had undergone training to learn about the items and were allowed to spend a day at the Museum being the ‘experts’.  It was a pretty cool program. We got to handle a panel from a relic box that was made to hold a bone from a dead saint.  Beautiful piece of art – kinda creepy purpose. 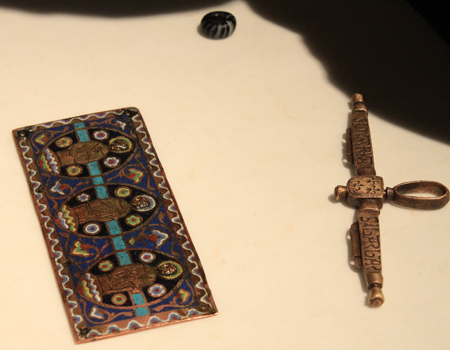 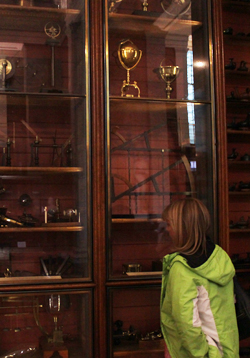 After being completely overwhelmed by that room, we looked at the map and choose our next move carefully. 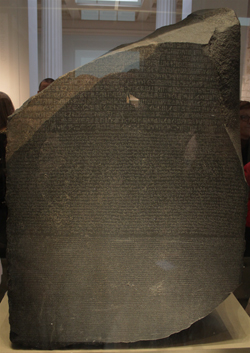 The British Museum is home to the Rosetta Stone.  As a linguistics major, the Rosetta Stone was a priority.  We made a beeline to see the huge piece of rock which was inscribed with a decree by Ptolomy V from about 200 BC in three different languages.  When it was discovered in 1799, it was the first text to provide a translation key for Egyptian hieroglyphics.  Up until this point, no one was sure if hieroglyphic symbols were sound units or meaning units. The term ‘Rosetta Stone’ has come to mean the crucial key to unlocking information.  As we approached the Rosetta Stone, we bumped into a few of our friends.  It’s a bit surreal to see people out of context. 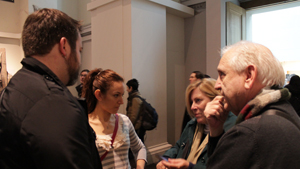 After the Rosetta Stone, we headed to the Elgin Marbles.  They are pieces of the Parthenon and other buildings from the Acropolis of Athens.

The Earl of Elgin was the British Ambassador to the Ottoman Empire in the early 19th century and received ‘permission’ to remove about half of the Parthenon. 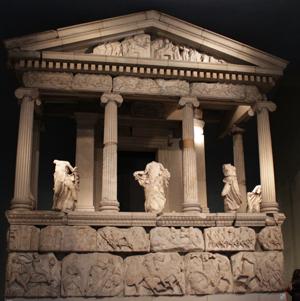 They were purchased by the British government and placed on display in the British Museum. Eventually, they constructed a customized gallery to display the pieces.  The debate continues about whether they should remain in London or be returned to Greece.  It is quite amazing how many huge pieces were brought over.  As we walked out of one room, I overheard a teenager ask her parents “How did they move an entire temple?”  It’s a good question. 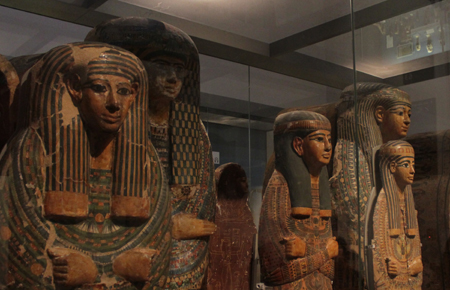 We identified “Mummies” as our next destination and wandered through rooms and rooms of ancient dead people. 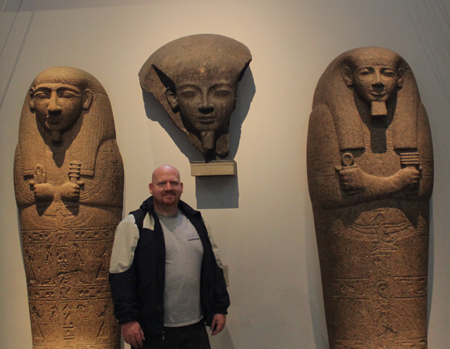 Then we moved on to more Greek, Roman andAssyrian artifacts. 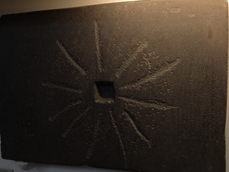 Some of the pieces spoke to me more than others. These busts of ancient philosophers reminded us of the Haunted Mansion at Disneyland.

At that point, I was yearning to see a painting or drawing.  I’d had enough of artifacts. 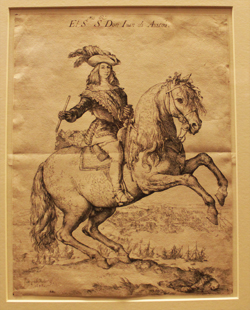 We checked the map and found that there was only one room of the British Museum with two dimensional art: a collection of Spanish drawings. They looked alot like illustrations from old newspapers.

We were surprised to find a ‘cartoon’ by Michaelangelo tucked into a corner of one room. 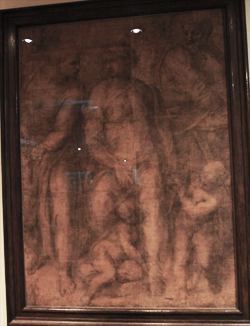 Someone who lived close could spend a lifetime exploring the treasures of the British Museum for absolutely free.  Pretty amazing!

Having reached the end of our rope, we checked the map again for things we would regret missing.  There were two rooms dedicated to the history of clocks. 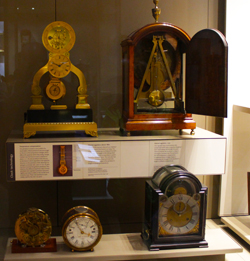 I know, this doesn’t sound like a ‘must see’, but a friend of mine is married to a clock guy and I thought he might appreciate some pictures of cool clocks.  It was amazing to see how clocks have evolved over time and how creative clockmakers have been. 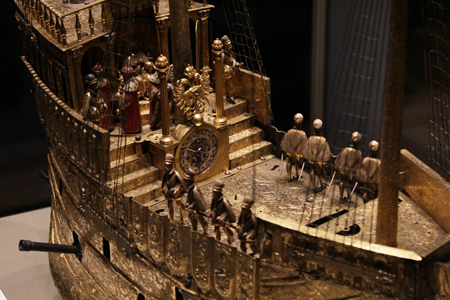 After the clocks, we surrendered to our mental overload and headed across the street to Starbucks to plan our next move.