On our morning at the Tower of London, I was fascinated by many aspects of the history of the buildings, the royals, and how they both changed over time.  Among the most interesting (and disturbing) stories were those involving all the animals that lived at the Tower.  Of course the most famous and enduring are the Ravens.

According to legend, if the six ravens ever leave the tower, the kingdom will fail.  Charles II was the first to insist that the ravens be protected and maintained in the fortress and there is still a Raven Master in the Yeoman Warders today caring for the SEVEN resident ravens (six and a spare). Even though they have one wing trimmed, they have been know to ‘fly the coop’ – one was recently spotted outside a pub on the East End.  Another, Raven George, was sacked for eating tv antennas.

All sorts of different animals were given to the ruling monarchs over the years.  The first record of animals at the Tower were lions in the early 1200’s.  By the 1600’s, the lions were made to fight other animals for the enjoyment of the visitors.  The first grizzly bear ever seen in England was a gift from the Hudson Bay Company to George III in 1816.  Among my favorites were the ‘white’ bear which was a gift of the King of Norway to Henry III in the 1250’s and was kept chained to the tower wall, but allowed to swim in the Thames to catch fish to eat. 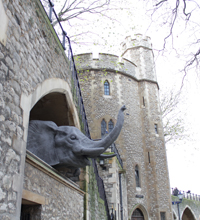 Henry III must have been an animal lover because just a few years later, the King of France sent a male African Elephant.  They really didn’t know how much room an elephant required so they built a 20 by 40 ft room.  Fail.

Other animals were fed unusual diets, either because no one knew any better or the animals seemed to enjoy it: Ostriches ate nails and Zebras drank ale. Various visitors were mauled and even killed by these animals because they were treated as ‘pets’ rather than as the wild animals that they were. In the 1830’s, all the remaining animals were sent to the nearby London Zoo in Regent’s Park, putting an end to the Royal Menagerie.