*In my journal, this day starts with the words “Happy Birthday E!”  My middle child turned 15 while we were in London and I was feeling a slight twinge of guilt, but trusted that his sibling, grandparents and cousins would take care of him.

Through our travel agent, we were able to get some London Passes at a reduced rate.  The London Pass allows you free access into as many of the attractions on their list as you can in 24 hours.  In order to make the most of the passes, we started early on that Friday after Thanksgiving.  The top of our list was the Tower of London.  The Tower is still a functioning royal palace as well as an amazing historic castle.  It turned out to be one of the major highlights of our trip. 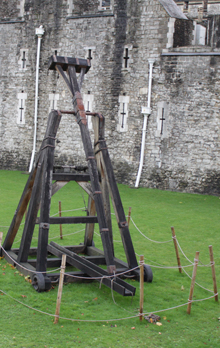 The original stone tower (The White Tower) was started on the banks of the Thames River in the 1070’s by William the Conqueror to be used as a fortress-stronghold.  The Tower was protected by two existing Roman walls, the Thames and some strategically dug ditches.  Beginning with Richard the Lionheart around 1189, work was begun on the other structures that still exist today. 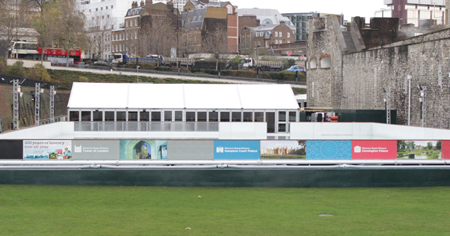 A recent addition to the Tower is the ice skating rink that was built in the area that was once the moat.  They filled the moat with earth in 1855 because it was causing illness and the stench of stagnant water was making it a very unpleasant, although historically accurate, experience.

Early birds that we are, we arrived in time to see the royal guard accompanied by a Yeoman Warder march out and unlock the main gate to the Tower.   The Yeoman Warder are the ceremonial guards who are chosen by the Queen based on their outstanding military service to live and work at the Tower, leading tours, passing on the history, caring for the Ravens, and protecting the Crown Jewels. 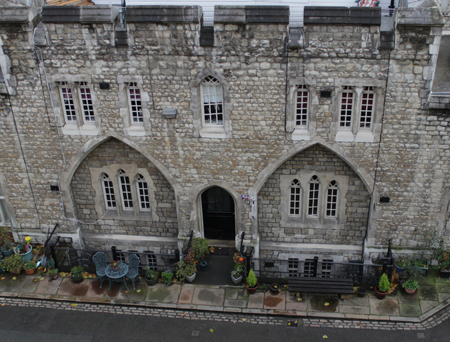 The Yeoman Warders’ Houses in the walls surrounding the Tower of London.

After exploring the various buildings and areas of the Tower on our own for a bit, we joined one of the Yeoman Warder tours lead by a Beefeater named Andy.  (No one knows exactly why they’re called Beefeaters, but it may be because they were allowed as much meat as they wanted from the royal table so they had strength to defend the Tower.) 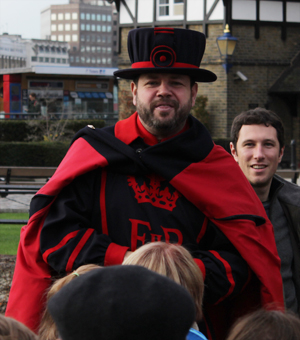 Andy led us through the grounds of the Tower telling the brief history of each building and explaining how it functions today. The tour itself ended inside the Tower of London Chapel, St. Peter ad Vincula (“Peter in chains”) where Anne Boleyn, Catherine Howard, and Lady Jane Grey are buried.  They were all prisoners in the Tower and each executed on Tower Green just outside the Chapel windows.  While we sat in that Chapel, I was again struck by where I was – the actual location of so many famous happenings that shaped England and the world. 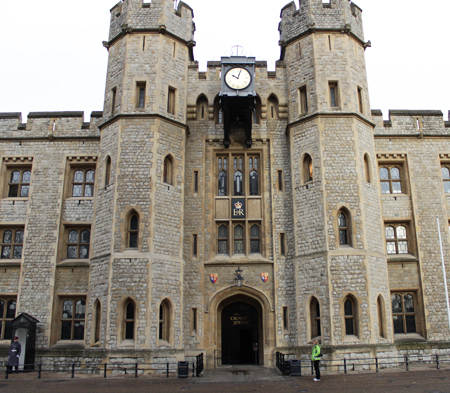 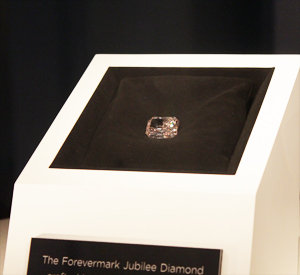 After the tour, we made our way through the Waterloo Barracks where the Crown Jewels are currently housed.  As with every other museum, gallery, and historical landmark we visited, the security seemed light.   Hubby took a picture of the 35 carat Queen’s Jubilee Diamond before being warned by the ONE security guard that photos weren’t allowed.

We wandered quickly through the Bloody Tower where the bodies of 12 year old Prince Edward V and his younger brother Richard were found after their murder in 1483. 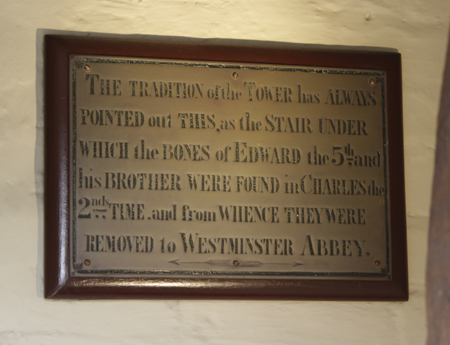 One room in the Bloody Tower housed Sir Walter Raleigh on and off for a total of 13 years. They have recreated his study so you can see where he spent his days – pretty posh for a prisoner accused of plotting again James I and failing to find the city of El Dorado. 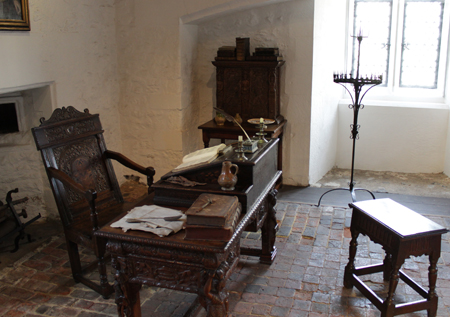 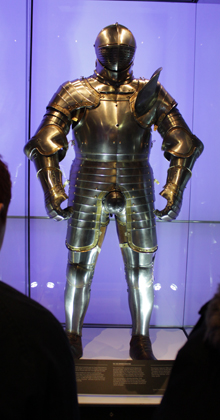 The White Tower (the oldest structure) is now home to military themed displays: horses, weapons, and armor. The picture is of King Henry VIII’s armor. Either he was well endowed or paranoid. Although I suppose he could have just been a braggart.

The Beauchamp Tower was used to house many of the most important religious and political prisoners including some amazing graffiti artists.  The walls of some rooms are filled with carvings from prisoners both known and unknown. 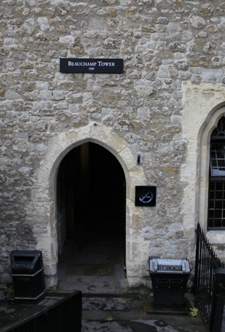 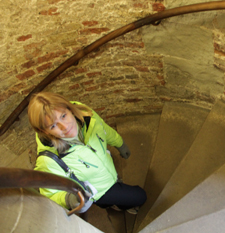 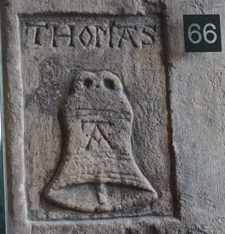 Can tell what this guy’s name was? (right)

We did finally reluctantly tear ourselves away from the Tower, mostly because we were starving.  We ate some passable take-away fish and chips and headed for our next destination.  Before we left, Hubby took a picture of the Tower Bridge (built in the late 1800’s). 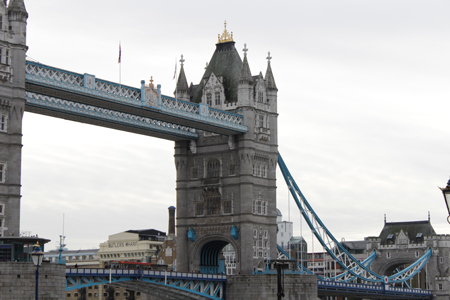