With my feet throbbing in protest, I followed the group past the courtyard of St. Paul’s which used to be used as a marketplace for booksellers and publishers including John Newbery (considered the Father of Children’s Literature and namesake of the Newbery Medal). We walked over a few blocks, past Milk Street and Bread Street (those clever Brits), to St. Mary-Le-Bow Church to have Thanksgiving lunch in the cafe now housed in the crypt. 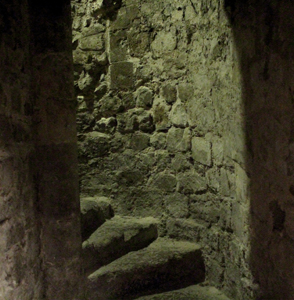 It may sound like an odd choice for Thanksgiving – no turkey, no stuffing, no pumpkin pie, no football – but it was outstanding on many levels. 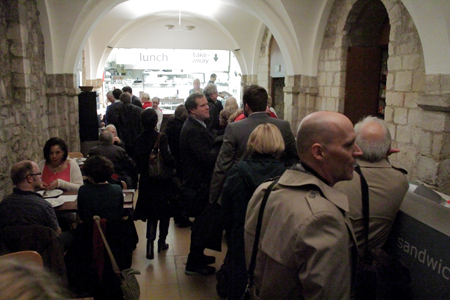 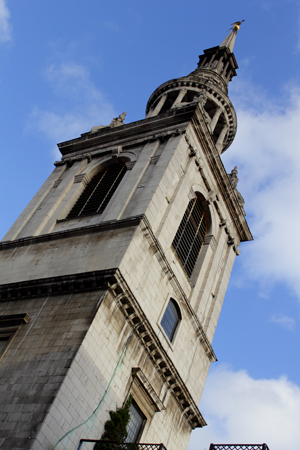 The twelve bells of St. Mary-Le-Bow are called Bow’s Bells and it is said that to be born within the sound of Bow’s Bells makes you a true Cockney. Having once played the Artful Dodger in Oliver, I felt right at home.

It was also the sound of Bow’s Bells that the BBC World Service broadcast into Occupied Europe during WWII.

The crypt itself dates back to 1090 while the current church building was designed by Christopher Wren after the Great Fire of London in 1666 and completed in the 1670’s.  The steeple had to be rebuilt after it was destroyed by a bomb during the Blitz and it took 20 years to get the bells ringing again. 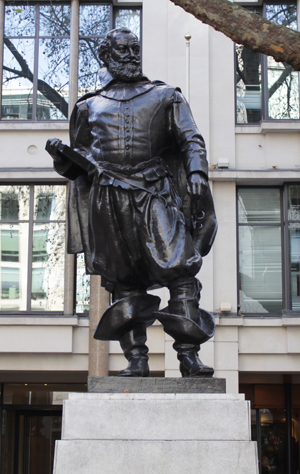 The courtyard of St. Mary-Le-Bow contains a statue of Captain John Smith, founder of Jamestown and leader of the Virginia Colony who worshipped here when he wasn’t off in the new world.

As we settled into the crypt, it was great to sit back and reflect on the morning.  Hubby had a hamburger and I had the most delicious Beef, Mushroom and Guinness Pie.  We split a Treacle Tart for dessert.  Treacle Tart is Harry Potter’s favorite dessert and is much like a pecan pie without the pecans.

Since my feet were screaming bloody murder by this point, I limped back to the Tube and headed straight for my tennies back at the hotel. We had told our children that we would Skype them that day, so we headed over to Starbucks to make use of the free WiFi (the hotel charged).  Our connection was not strong enough to support video so we stuck to audio to wish them a Happy Thanksgiving and find out what they’d been up to. They seemed to be surviving so we kept it short. Once we hung up, all our have-to’s were done for the day. Next came the want-to’s.  What to do?  What to do?