*In the interest of clarity and not boring you out of your gourds, I have broken this day into multiple entries.  This is the pre-service part.

22-11-12.  That’s the way I wrote the date in my journal.  It was Thanksgiving Day and I was in London.  I was so amped up that despite the late night, I woke before my alarm.  In order to give ourselves plenty of time to catch the tube at rush hour and pass through the heightened security at St. Paul’s Cathedral with Hubby’s suspicion-arousing camera gear, we headed down to breakfast early.  Hubby decided to give the Bangers a try and immediately regretted it.  They were flavorless and mealy – let’s hope that’s not typical or I’ll start to believe what they say about English cuisine.  I decided to stick with what I (thought I) knew and had Special K.  Except Special K in the UK is whole grain wheat not corn – Yum!

We ran up to the room so I could change into my fancy shoes and then met up with a majority of the group in the lobby.  The tube station was packed as expected.  We compressed about 90% of us onto the first train requiring the last one on to duck her head so the doors would close.  She spent the short ride with Hubby’s tripod pressed squarely into her side.  We’ve nominated her for a citation for valor. 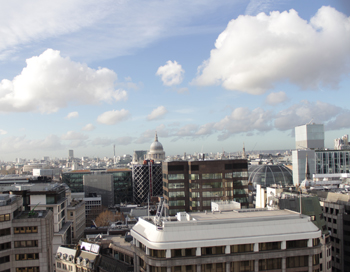 As we walked the short distance from the tube station to St. Paul’s, I was impressed by the size of the building itself.  It stands on the top of Ludgate Hill and can be seen for miles, but I had no idea how massive it was.

They had set up K-rails and barriers all around the structure due to an increase in international tensions and we were subject to bag searches as we passed through security.  The guards ‘ticked’ our names off the master list and directed us to the side door into the crypt.  At the crypt door, everyone was given a badge that said ‘Choir’ to wear regardless of whether they were actually singing. Apparently being part of the Choir gave you the highest level of access possible that day.

We gathered upstairs for rehearsal, passing by 100’s of people buried in the walls and floor.  As we entered the cathedral, I was gobsmacked by the magnificence. 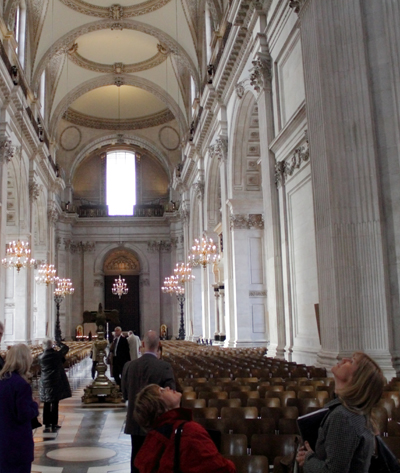 I stood in awe a few moments trying to take it all in until I realized that I wasn’t capable – it was just too much. We were allowed to take just a few pictures inside the Cathedral – a rare privilege. When the youngest member of our group made her way up the stairs and arrived in the main Cathedral, I swear her jaw hit the floor.  She plopped down next to me in the choir stall and after a few moments of stunned silence said, “Is anyone else having trouble concentrating?  I can’t stop looking at everything.”  I assured her that we were and passed her a copy of the order of service.

As the pre-service rehearsal began, we soon realized that Scott was justified when he insisted we listen to him with our eyes. 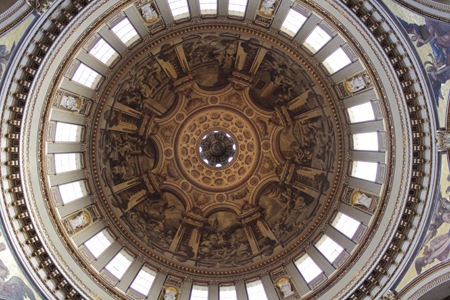 The sound in the cathedral seemed to rise straight up, bounce off the dome, echo around and come back as mush – beautiful, delicious, harmonic mush.  As we practiced, we heard our voices, not as we normally do surrounding us and our neighbors, but calling  back to us from distance lands in a less recognizable form.  We lengthened our rests to make the most of the acoustics, crisped up our ending consonants, and practiced staying together by watching rather than listening.

Our practice ended nearly a half hour before we needed to be in our places for the service, so I got a change to wander the crypt while Hubby found a seat in the congregation.   You can read more about the crypt here.

When it came time to ascend into the cathedral once again, I realized that I wasn’t nervous and hadn’t been all day – zero, nada, nil, nothing, no nerves.  I spent a minute trying to savor the experience, but it just didn’t seem real.  It certainly didn’t seem real to look out and see Hubby in the front row VIP seats with the American Ambassador!  It turns out that the Pastor of the American Church in London, who was delivering the sermon, had offered him his extra seat. 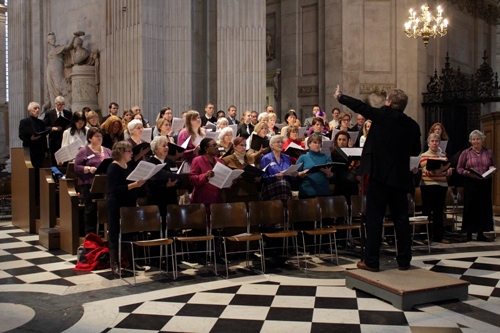 Before the formal service began, we sang three spirituals arranged for us by Scott Stroman: “Jesus is a Rock,” a swing version of “In the Garden” (or, as we called it, ‘the Hoo-Hoo song’) and “The Storm is Passing Over”.  We sang all three of these songs from memory and it feels like they’ll be with me forever.  As we sang, the thousands of people were still coming in, talking and greeting each other.  As we closed the last song, we began to clap along which startled quite a few people and caused a few of St. Paul’s wandsmen to smile and smirk.

For more on the St. Paul’s Thanksgiving service, you can keep reading here. 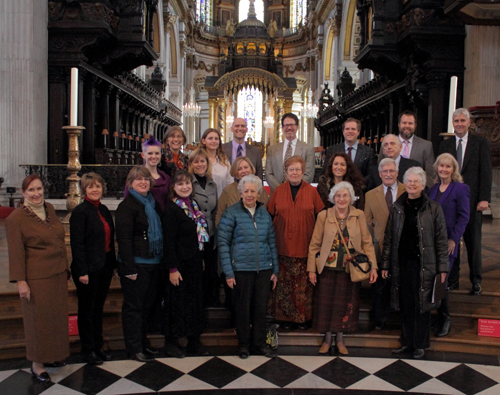