After our adventures in Greenwich, we dashed back to the hotel and grabbed our gear for rehearsal: my music and Hubby’s camera.  Hubby was along to document the choir’s trip and this would be his first chance to photograph us all in one place.  We strolled up Tottenham Court Rd at a Londonish pace and were buzzed in through the back entrance of the American Church in London.

Here we combined with the rest of the choir – some professional, some amateur –  that would be singing in St. Paul’s Cathedral for the Thanksgiving service.  We also met the conductor/arranger/composer Scott Stroman for the first time. 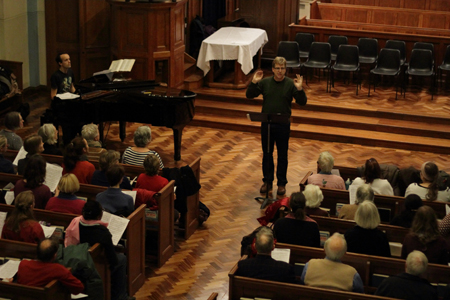 It was great to be part of a larger choir and really feel the music how it would be performed in St. Paul’s.

Scott began by warming us up and taking us through each of the five pieces (3 spirituals, an original Gloria in Latin, and a Samuel Barber setting of a James Agee poem).

It was kind of like being conducted by Severus Snapein a good way. You could feel him pulling the music from you.

The spirituals were supposed to be memorized and now I know why.  We didn’t sing a single one as written: he led us from chorus to verse and unison to harmony as the Spirit moved.  It was an exercise in trust and our ability to watch and follow. Quite a wild ride! 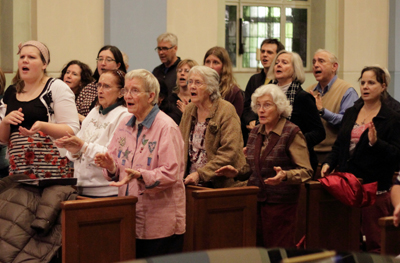