A few days before we left for London, there was some chatter going around about visiting a brewery while we were there. A member of the choir had some restaurant connections and wanted to go check out one brewery in particular.  As it turned out, this was a private tour for just four people, and Hubby and I were two of the four.  I’m not sure how that happened, but this afternoon was one of the highlights of our trip.

We set out from our hotel on a rainy afternoon to catch the tube into an area of town we hadn’t yet been: Greenwich, home of the Greenwich Royal Observatory, namesake of Greenwich Meantime.  We were headed south of the Thames and East of the Isle of Dogs.  Yikes!  The first part was easy: take the Northern Line South to Waterloo and then take the Jubilee Line East to North Greenwich.  We soon discovered that the Jubilee line was slick and gorgeous compared to the trains we’d been on before.  As it dumped us off at the North Greenwich hub, we could see the dome of O2, aka the Millennium Dome, hovering nearby.  Ah, well, another time. 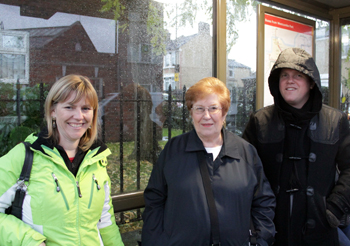 Here was the tricky part of the trip: the bus.  Not for lack of planning, though. We had two maps, we knew which two busses would get us nearest the brewery and we even knew what stop to get off.  The tricky part was navigating the bus drivers.  Tourists that we were, we checked with the driver when we boarded, “Does this bus stop at Blackwall Lane?”.  “Yes.”  “Can you tell us which one that is?”  “Just listen, you’ll hear it.”  Um, ok.  We sat as close to the driver as we could and listened closely to the announcements for Blackwall Lane.  After a half dozen stops, it felt like we had gone too far, so our fearless leader stepped forward to ask “Is this Blackwall Lane?”  “That was a few stops back.”  We bolted off the bus onto a nameless street. 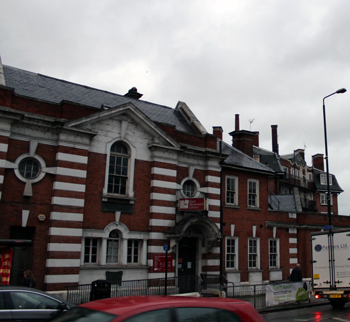 We found ourselves in front of the East Greenwich Library with a plaque on the front that read “A gift of Andrew Carnegie.”  It was dark and shuttered and looked as forlorn as we felt.

We crossed the soggy street with a gang of school boys in their uniforms to wait for the bus going back the other way.  At this point, the rain and wind picked up to remind us of our orphan status. Bus after bus passed us, none of them the right one. If it hadn’t been miserable weather, we might have abandoned the bus altogether.  It couldn’t be too far, right?  Then we saw our bus coming.  Hallelujah!  Sort of.  The bus pulled up and let everyone off through the back doors and refused to open the front doors so we could board.  Our leader shouted through the window to find out what was happening and got stoney silence in return.  Finally, one of the disgorging passengers explained that the bus terminated here and we would have to wait to catch the next one in about 15 minutes.  Arrrrgh!

Did I mention we had an appointment for this private tour?  And we needed to be back at the hotel right afterwards in order to make it to rehearsal with a director we had never met?  And we were warned not to be late? As the minutes ticked uselessly by, we decided to give walking a go and trudged on to the next bus stop.  It may not have gotten us to the brewery any faster, but it made use of the adrenaline we were producing.  We did catch the right bus and jumped off a stop early because we were nervous about going past it again. 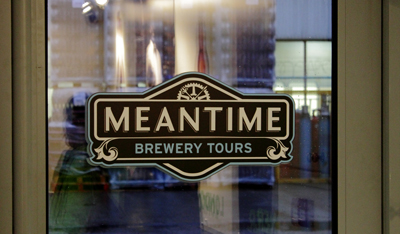 When we arrived at the brewery, Joe, our tour guide, commiserated with us over the Greenwich bus drivers. 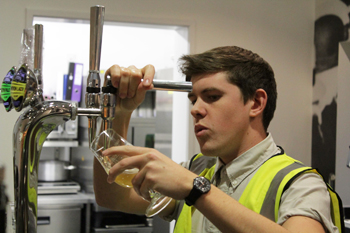 The tour was fabulous as Joe regaled us with stories of the different beers and their origins: London Lager,  London Porter, and India Pale Ale.  This brewery focusses on creating craft brews based on the historical recipes and characteristics of London’s heritage. 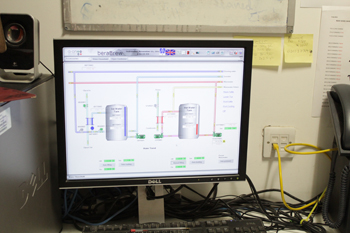 Instead of pasteurizing their beers, they employ two microbiologists who monitor a filtering process that uses the skeletons of microscopic sea creatures.  This means that the Lager is hoppy and carbonated.  Yum.  The Porter is dark and thick, brewed from an 18th century recipe.  Porter gets it’s name from the men who used to hang out on the street corners waiting to be hired to carry heavy items throughout the city.  These porters would stop at pubs along their route to fortify themselves with a strong malty pint, thus the name. The India Pale Ale was brewed in the classic style with more alcohol in order to survive the long journey to India.  My least favorite of the three, it was still a very drinkable beer. 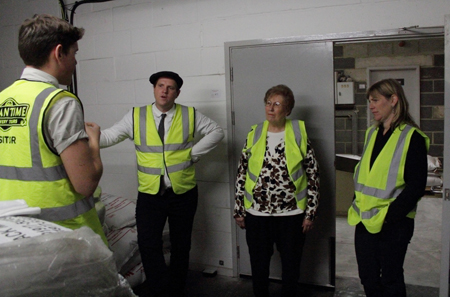 As Joe guided us around the brewery, the tour got more an more technical.  I was impressed by their commitment to quality and their facility was gorgeous.  Stainless steel is very sexy. 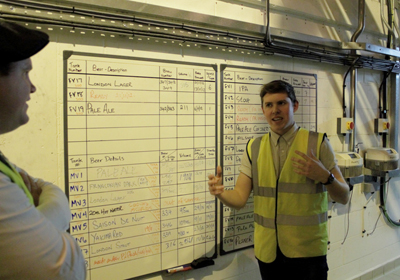 It would have been wonderful to stay and sample some more.  Their tasting room was filled with beers from someone famous’ collection (just another detail I’ve forgotten already) including some one of a kind commemorative bottles.   It was an art gallery of beers. I’m still on the lookout for Meantime in L.A.  I’ll certainly let you know when I track some down.

*Our trip back to the hotel was extremely uneventful and smooth.  Not very exciting to blog about, but we were due for some boring bits right about then.