There’s a particular 3 year old who loves to come in to my office and inspect the ‘machines’ I have.  He checks to make sure the calculator, adding machine, computer mouse, bicycle pump and leaf blower are all in their places.  We talk about who they belong to and what they are for and if he can ‘have’ them.  He usually leaves my office with the calculator in hand, but, sometimes, he gets to play with the leaf blower.  These are VERY special days. 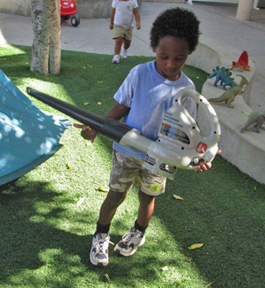 The first time I watched him with the leaf blower, I was struck by how he used it. Instead of asking to plug it in or flipping the power switch, he pulled an invisible starter cord over and over again. It suddenly became very clear: even though the leaf blower in his hands had no starter cord, he had seen one being started that way and that had become part of his script for using a leaf blower.

The power of observation is strong with this one.

I know from talking with his parents that this little guy is obsessed with their gardener.  He watches him intently and takes note of every thing he does.

I wonder if that gardener is aware that he is an example, that his actions are being studied and mimicked.

“Be imitators” the Bible says.  No need to tell kids.  They got this.

This brings up two questions: Who is imitating you?  Who are you imitating?