Its amazing how little time I spend in silence. 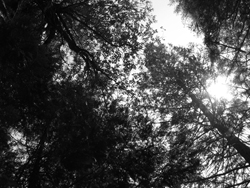 I know, its not really silent there are cars going by and an occasional bird chirping, but its close enough. Technically, the silence is also being disturbed by the scratching of my pencil on this paper.  The loudest sounds I can hear right now are inside my head.  My thoughts are hurling themselves around, trying to get out somehow.


I wonder what they would be doing if Id remembered to charge my ipod?

Would the beat have distracted them or would the lyrics have sent them off on a tangent?  Would that have been worse than whats happening now? Or better? Or just…different?

What I do know is that if Im going to commit to this blogging thing, and I am,  Im going to be spending a lot more time trying to capture those thoughts.  If silence sends them sliding out onto the paper – Bring It On!

Now, because I live in a two bedroom apartment with four other people and a dog, I may need to get creative so lets admit up front that I wouldnt be the first mom who locked herself in the bathroom for some peace and quiet.

Creativity doesnt scare me.  Wondering what happened to all those thoughts I didnt pay attention to does.